How does this happen?

Nodes with presence analytics capabilities collect data captured through the air as WiFi-enables devices (EX: cell phone, laptop, tablet) perform “probes”. A typical iPhone will send a probe out that “looks” for a list of available WiFi access points every minute on stand-by, and more if it’s being used). These probes contain a MAC address of the device (or a randomized MAC address). These MAC addresses and other information such as signal strength are captured by the access point (nodes) and that data is sent to the Analytics4WiFi platform for further analysis.

Passers By: A device that has been seen by a node, but not present for more than 5 minutes.

Visitors: A device that has been seen, and is present to a node for more than 5 minutes.

Connected: A device that has attached and associated to a node (Access Point). This does not mean that as a result of that connection, they browsed the internet, only that that device attached to a wireless network from either a previous connection and or an attempted connection. 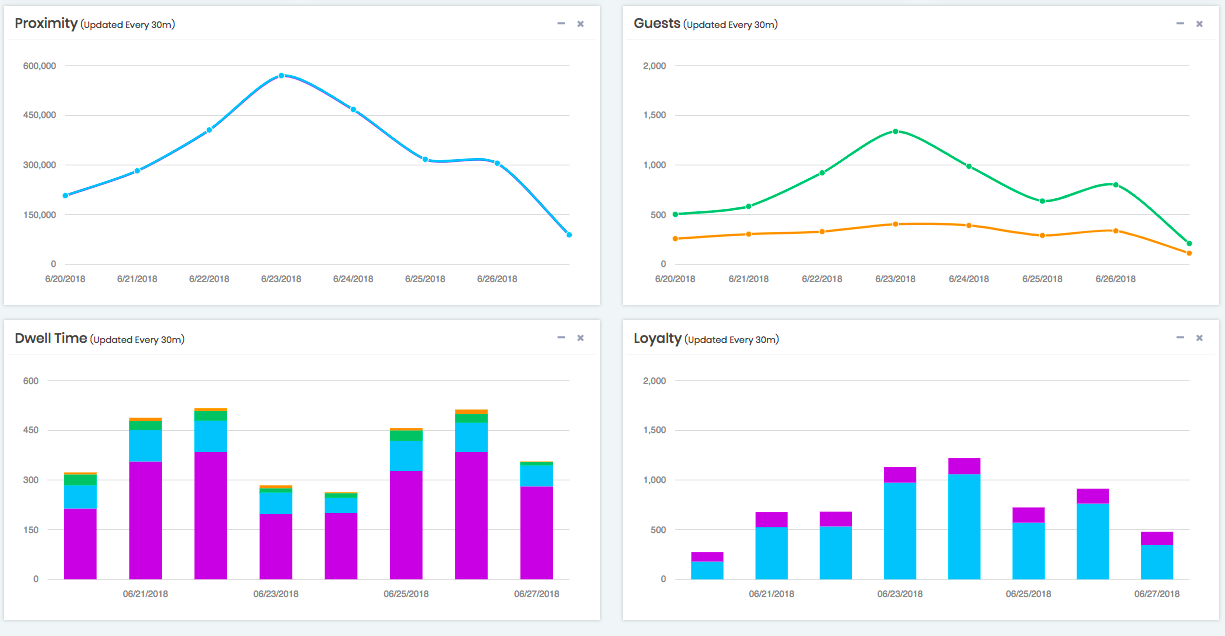 Proximity: A view of the total number of times a MAC addresses has been seen by any node.

Guests: A visitor is defined as a device that has been seen in a node or group of nodes for more than 5 minutes.

Dwell Time: An aggregate view of how long a device is seen by a node or a group of nodes.

Loyalty: The loyalty graph displays the percentage of new vs returning devices.

Hotspot: A specific venue that will contain nodes that report presence analytics data. (ie: Acme Burgers location at 123 Your Street, City, State, Zip). You can also separate physical venues into certain hotspots if you would like to report different areas from within a venue (ie: Acme Mall Floor 1 and Acme Mall Floor 2).

Node: Equipment such as a central gateway or specific access points that report to the Analytics4WiFi platform.

“Device” – A WiFi-enabled device that is periodically broadcasting a probe request containing RSSI (signal strength), device MAC address, Time Stamps, AP Mac address, Location Lat/Lon etc. For security purposes, many modern devices will send out randomized MAC addresses in order to protect the device from outside attacks. ie: if an Apple iPhone’s true MAC address is YY:11:AA:22:BB:CC and if that device has never connected to the node that is receiving a probe request from that device, then the node may receive a random MAC address such as 11:22:33:44:55:66, and the next time it sends a probe request it may send out a MAC that is completely different. The Analytics4WiFi system is designed to collect all information that is sent by a node and there is no way for us to decipher a randomized MAC address, therefore, the number of MACs seen values may be skewed exponentially.

MACS / MAC Addresses: A media access control address (MAC address) of a device is a unique identifier assigned to network interface controllers for communications at the data link layer of a network segment. MAC addresses are used as a network address for most IEEE 802 network technologies, including Ethernet and Wi-Fi.

New Guest: A new device seen or connected for the first time ever (for that client).

Repeat Guest: A device seen or connected to a specific client that has been seen anytime in the past (based on the time-frame in the particular area).

RSSI, Received Signal Strength Indicator: This is the strength between the guest device and the access point it’s seen by. The lower the number, the higher the strength. RSSI is measured in decibels (db). (ie: -55db would be high quality, 5 bars where -85db would be low quality, 1 bar). The Analytics4WiFi platform ignores any data from devices that are ultra poor signal strength, -86db and lower).

Footfall: A way for the wireless network to count visitors  and track their movement throughout the venue.